Drugs tear families apart — it did to mine. I was just 12 years old when I realized that my mother was a crystal meth addict. Just a 12-year-old boy, I hardened like a rock, shocked at how bad it was.

My mom, I couldn’t even look at her because I didn’t recognize the person staring back. No emotions, face sunken, huge black bags hung under her eyes. “I’m her protector,” I thought, but how can I, a young boy, protect someone from themselves, from a drug so powerful — something that tears apart hundreds of families, only to leave them with distant memories of the love they once shared. 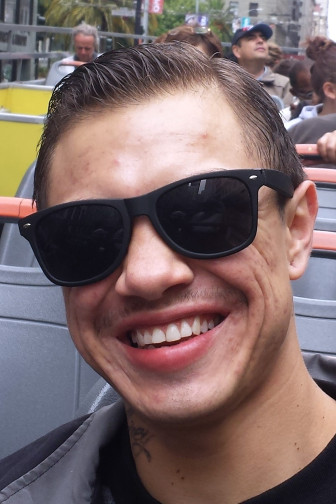 Daniel B. Photo: Daniel B.

It hurt me so bad having to see my mother like this, but worse was having to deal with my father’s vodka-stenched kiss. At the time I couldn’t even comprehend, much less deal with, the emotions that were stirring inside me like millions of killer bees. She my mother, he my father — they were my role models, and they were as blank as computer paper. The only thing I found written on my mother’s face were the curving lines of the constant pain she had to endure, and yet tried to hide with crystal death.

I ran from my father’s beatings. I roamed the streets, looking for someone who might acknowledge my struggle, might see me. I vandalized things without fear of consequence. It was a small crime compared to what was happening at home: real underground activities of gang-banging, drug addiction, con artists. Some family.

Strangers would fill my apartment day and night, cutting, chopping and printing, the stench of metal against metal, burning sparks and electricity pulsating through the thick smoky air, as they stole copper from cables and constructions sites to sell for money. They committed their crimes not to feed their children, but to get their next high.

My sisters and I were young, not even teenagers yet. We would stay up all night, scared and lonely. We had each other but not a mother, a real mother who would hold our heads or put us to bed or who was there for us when we were sad or angry.

I took the beatings for my mother, torn between protecting the people I loved and just running away.

Ten p.m., midnight, even 1 a.m., the chaos never stopped. I would go to my father, only to get beat because his temper was even shorter when under the influence of his poison. Back home, I found my mother crying, gushing blood. I held her as she went limp, a 12-year-old boy thinking, “My mother’s going to die.” I tried to calm my sister. We huddled together, crying hysterically. By midnight my mother was still gushing blood, my sister’s father nowhere to be found. So alone — me and my little sister. “Grab a towel, we got it,” I said. “Stop crying,” I tell a child, even though I, too, am only a child.

Finally I realized I was the only one who could take responsibility, who could get my mother to the hospital. I had to be strong enough to deal with my father’s beatings, to defend my sisters, to caress and hug them so they wouldn’t be scared. It was overwhelming. I fought the urge to use drugs myself. I fought back against the abuse. I took the beatings for my mother, torn between protecting the people I loved and just running away.

In the end, I, too, ended up a victim of drugs, using them myself a few years later. This is how drugs can tear people and families apart. In the end, we are all victims of the chaos that drugs bring into our world: the users and abusers, their families, and most of all, the children who are left alone to fend for themselves.

I was molded into this person I wasn’t: Fear, anger and sadness formed me into who I thought I was. I consistently used to cover up the pain inside — the pain of not being who I was, of all the trauma and pain I had felt and went through.

Finally I accepted myself and overcame my fears of life. I accepted my circumstances, and finally the drug addiction ceased to be so powerful and I was no longer powerless.

Daniel, 19, wrote this column as a member of InsideOUT Writers, where he has participated for three years and now dedicates his time to work, school and volunteering. He hopes to open an organization that focuses on homelessness, prison and juvenile incarceration intervention.