As long as I can remember, drugs and alcohol have been part of my life. I’m not quite sure when or how our relationship started, but what I do know is that it has been a bittersweet relationship. The only way I could possibly describe it is by comparing it to the embrace of a serpent wrapped around me, tightening its grip by the second, which it then loosens up when it becomes too much to bear, just to tighten up again when I begin to gasp for air. An endless battle, which many have lost and I still struggle to overcome.

I can remember the day I first noticed the serpent. I was around the age of 9, and I was in the car with my father and younger brother. I’m not quite sure where we were heading, but I do remember pulling into an alley on our way there. I remember my father stepping out of the car and telling my brother and me to stay in our seats and not to move. Curiosity got the best of me and I unbuckled my seatbelt and followed my father with my eyes. I saw him walk toward a man standing by a run-down building where they made a quick exchange while they were pretending to shake hands, and I saw him come back with a sack full of crystal meth. At that time, I wasn’t sure what I was witnessing, but the reality of what happened that day was soon to come.

A few months later, I saw my father go through the most drastic transformation I’ve ever witnessed: I saw him become a stranger and get lost in his addiction. He would disappear for days at a time and when he would return, I would see him sitting down on the floor of the patio of the abandoned trailer that everyone in the trailer park avoided. He would sit there for hours at a time laughing and talking to himself in some unknown language that I have to assume he invented. I noticed that anything of value I owned would start disappearing and soon realized that he was selling my things to support his addiction. I saw my father become a mere shadow of the great man I once knew.

Now that I have acknowledged my problem … I am able to stay strong … to overcome the continuous battle that lives inside me. 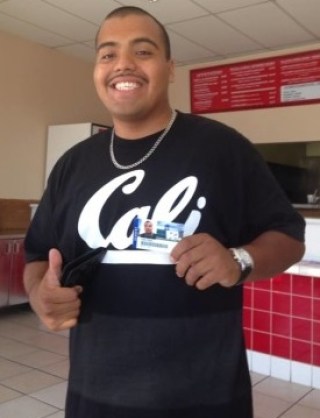 As the months passed, I noticed myself attracted to the same habits. I was only 11 years old, but my age didn’t stop me from falling into the same trap my father did. With my father lost in his own world and my mother working 12-hour shifts to support our family, I was left to do as I pleased. I can remember when I first tried crystal meth and how it made me feel.

It opened a door to a world I had never experienced, and I wasn’t going to turn back anytime soon. Once I got a taste I couldn’t stop. The drugs weren’t enough. I started to drink heavily on a daily basis. Some days I couldn’t even remember what I did. I was just trying to get away from my reality — to get away from all the pain and grief inside me — and this was the only way I knew how.

I would take any opportunity I had to get drunk or high. I can remember going to the Walgreens down the street just to steal the cough and flu medicine. I would get home and take the whole 16 tablets and just watch my life waste around me.

I didn’t realize how I was tearing my family apart from the inside out and I honestly didn’t care.

What I didn’t realize was how my actions were affecting my loved ones. I know that I didn’t set the right example for my younger brother, who took the same path. I remember countless nights when I would come into the house in the middle of the night to see my mother asleep on the couch awaiting my return, only for me to put her through the same ordeal the next day. I didn’t realize how I was tearing my family apart from the inside out and I honestly didn’t care.

When the influence of those drugs and alcohol landed me in a jail cell, I didn’t realize that I had put my family in the jail cell with me. It is only now that I have acknowledged my problem that I am able to stay strong and continue to overcome the continuous battle that lives inside me.

Jose Perez, 23, is a full-time student at Los Angeles Mission College majoring in political science and works for the Harold Robinson Foundation as a youth counselor. He is a member of InsideOUT Writers and the Anti-Recidivism Coalition.