Finding a Way to Stay Clean for My Daughter 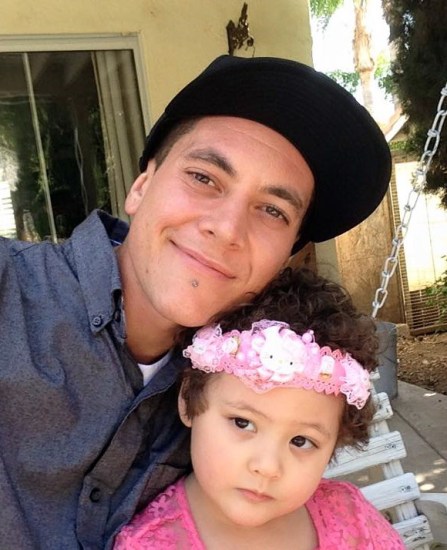 When my daughter Harlow was born, she had complications at birth due to cerebral palsy. Not long after birth, she was transported to Children’s Hospital in San Diego. I was 23 and her mother, Carla, was 24 years old. While she was in San Diego, Carla and I stayed in a motor home on the side of the hospital so we could see her every day.

We had just gotten back from feeding Harlow at the hospital, and we were hanging out in the motor home. I was getting high in the little bathroom smoking meth when I heard a knock on the door. When I went to open it, there was a little lady standing there. She could’ve only been in her mid-40’s, looking angry at the world. She informed me that she was from the Department of Children and Family Services and she was there to speak to Carla and me. I told her that we would be right out and would meet her by the cafeteria. Carla and I were concerned she was going to want to come in our motor home and look around. So while we got ready, we frantically grabbed all of the paraphernalia and hid it. Neither of us knew what was going to happen, but we had an idea that she was going to drug test us by the end of our meeting.

It took losing her before I realized that I needed to find a way to stay clean.

When we met up with her at the hospital cafeteria, the lady was sitting by a table waiting for us. I was wearing a long-sleeve shirt to cover my track marks. It was mid-July plus I was under the influence of methamphetamine, so I was sweating profusely, but I thought I looked good. Carla looked normal — you would never suspect her of being a heroin addict. Plus, she only smoked and didn’t inject the drug, so she didn’t have any track marks. After talking to the DCFS worker, telling her a censored version of our life story, she asked for a saliva sample. Carla didn’t hesitate since she had a prescription from the C-section she had just had. She was able to test positive for opiates.

I didn’t have any excuse, so when the lady handed me a piece of cotton on the end of a plastic stick and said, “just put it in your mouth by the side of your cheek,” my heart dropped. I knew I was going to fail. I had no saliva to give, so it looked very bad. I had to go to the restroom to get some water so I could give her a sample. When I was in the restroom I thought to myself if I got out of this I would definitely get sober.

Carla and I would have to go to family court to get her back.

Once I came back, though, and was able to give her my saliva sample I knew my fate was sealed. I wasn’t only on heroin and meth, but I was also taking Xanax everyday. At the time, I thought the lady was rude, but now I know she just knew that we were full of it the whole day.

When the results came back I was positive for almost everything but Xanax, and Carla’s came back negative. This was very hard on Carla and me, since this now solidified the fact that I was using drugs. It would lead to my daughter being taken from us before we even had her and going straight into the foster system. Carla and I would have to go to family court to get her back. Also, both of our families would begin to discover the skeletons in our closet and ruin what little trust we had gained.

Since then, the struggle to get clean has been tied to my daughter and my desire to be there for her and be a good father. It took losing her before I realized that I needed to find a way to stay clean. It’s been a lot of work, but every time I am with her, I remember that it’s worth it.  Her life is worth me doing whatever it takes.

Scott, 28, who writes with InsideOUT Writers, is a father, artist, activist, worker, student and teacher to the youth of tomorrow.

Cover illustration rendered from a photo of his daughter Harlow by Scott P.