Their Way Into Recovery 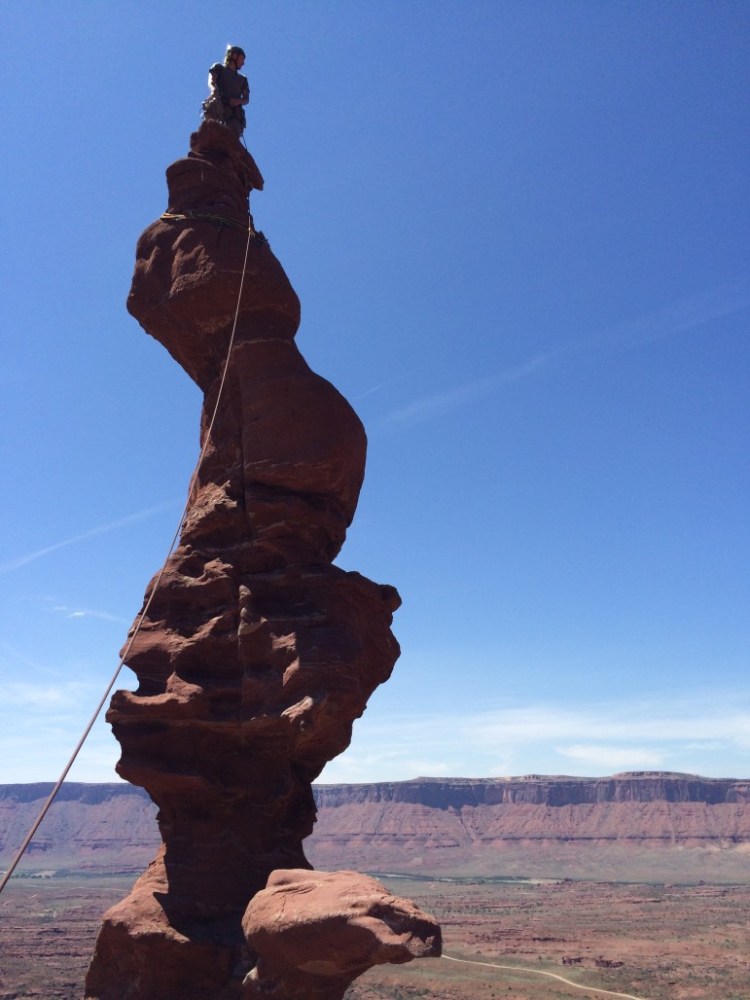 The pull of crack cocaine, heroin or alcohol can drive a mortal into the abyss of addiction. So, what exactly does that abyss look like and feel like for a teenager? “It’s a pretty dark place once you’re there,” said Mario Rossi, who should know. He started drugging and drinking at 14, and he crossed the line with overdoses. Rossi said he knew he was in the abyss because he was connected to absolutely nothing and no one, not even himself.

“I was looking out from my abyss thinking, ‘Man, it’s not going to be much longer before I’m gone,’” Rossi, 26, said.

Then a man named Scott Strode, the founder of Phoenix Multisport, a man with his own stories of the abyss, threw a rope down into that dark well to Rossi. Not a metaphorical rope, not a fairy tale rope, not a rope of clichés with operatic music in the background. A real, 60-meter-long dry rope with a diameter of 9.8 millimeters.

Many addicts, when they get thrown a rope, say, “Great, pull me up.”

No, Strode tells them. Pull yourself up. Here, take this real rope and fasten it to the real harness we gave you and start climbing up the wall of this cliff — a real cliff with jagged rocks that can scrape skin and draw real blood.

“By myself?” says the addict, who thinks himself incurable and without resource.

By yourself, Strode says, and we’ll give you some help out of those ashes you made of yourself. It’s why the program is called Phoenix. 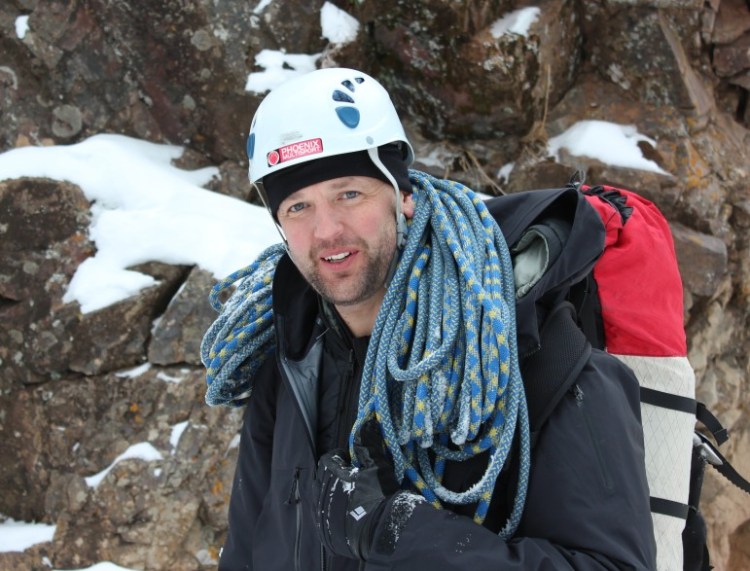 Here is what happens: The addict not only climbs up a mountain, he or she mountain bikes, runs through the mountains, and scales mountains that have jagged edges of ice. The addict begins to swell with self-esteem with each vertical step. This is not trading one high for another — it’s not as simple as the brain eliciting a dopamine high, the so-called runner’s high that replaces a heroin high: This is the high from a feeling of self-worth. Climbing up a cliff is a tough task and getting there, and standing tall, brings euphoria. 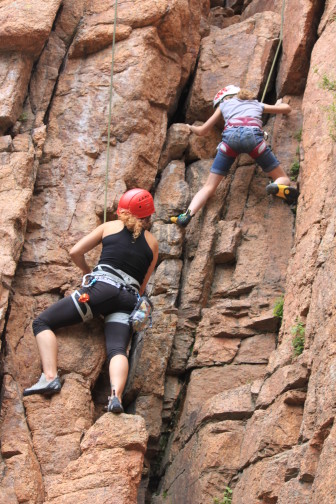 Participants in Phoenix Multisport’s “Together Families Recover” program during a climbing event at Bear Trap Ranch near Colorado Springs, Colorado.

That is the essence of Phoenix Multisport, created eight years ago by Strode, who is a recovering addict himself. His clients, many of whom become his instructors, started drinking and drugging when they were 13, 14, 15, 16 years old, but they do not sit in a circle and talk their way out of the abyss. They climb, bike, run, lift and box their way out and, as they do it, build a new identity.

They use it as a bridge.

Phoenix Multisport is completely voluntary. Strode’s staff does not drag unwilling climbers up the mountain.

Strode is not knocking more traditional treatment. He said Phoenix gets referrals from mainstream clinicians, among other interventionists, and said a combination of the two can work, too.

Here is another number to pay attention to: 0 — as in $0. Phoenix, which is a non-profit, is funded through grants from foundations and is free. If Phoenix is asked to go into a treatment center and conduct its programming, then the treatment center will pay for that service. The only requirement is that participants in the treatment center sign a “membership” agreement to follow guidelines, such as not using abusive language.

Phoenix Multisport has programs in Orange County, Calif., Boston, and Boulder, Denver and Colorado Springs, Co. It hired staff for its facility in Boston and started offering free classes on July 11 after raising $250,000 and receiving a matching grant of $250,000 from a foundation in Massachusetts. There are 600 active members in Denver, 200 in Colorado Springs and Boulder, and 100 in Orange County, Strode said.

Phoenix participants range from 16 to 72 years old, with the average age of 28, according to Phoenix’s in-house research statistics. Once in the program, participants can use Phoenix Multisport as much as they want.

A principle of taking healthy chances

The idea of re-setting one’s boundaries through physical activity is not new, said Dr. John Heil, a licensed clinical psychologist and president of the American Psychological Association, Division of Sport & Exercise Psychology.

Heil, who has conducted so-called high-ropes clinics for executives and companies, said the key to any successful program is “the implementation.” He does not deal directly with Phoenix, but he said the program’s principle is fundamentally sound. 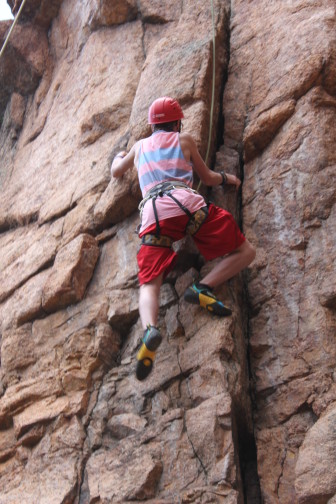 A participant in Phoenix Multisport’s “Together Families Recover” program during a climbing event at Bear Trap. Ranch near Colorado Springs, Colorado.

“Kids need to explore, take chances and test themselves, and this is something new, exciting and engaging,” Heil said. “It gives them a chance to do that in an environment that can be controlled. Basically, that’s the science. It is fundamental principles on how therapy works and how behavior change works.”

Kelly Cave, 24, is an instructor at Phoenix, but before that she was one of the program’s desperate clients. She started with alcohol when she was 13 and moved to cocaine. She did not feel good about herself, Cave said, so she started using drugs and alcohol as a way to do her own bioengineering of emotions. She tried to stop and was in and out of treatment centers for four years.

Then Cave found Phoenix. She said it was so “uncool” in high school to do the “athletic stuff,” but now her life depends on it. Cave uses the Phoenix Cross Fit program four times per week. She’s been clean two years.

“It is empowerment because you start at the bottom and you physically overcome a challenge right before your own eyes and everybody else’s,” Cave said. “There is something so powerful in those accomplishments. It builds self-esteem and shows people they can do anything they want to do.”

Cave will flip through old pictures of herself, the ones where she was strung out, her ego degraded by her addiction. The pictures would be haunting to look at if she had not turned her life around. But now they are part of her self-revelation. She changed dramatically because she changed a channel.

“I don’t recognize myself in those old pictures. I was a lot skinnier, I had a lot of insecurities and self-doubt, and I [was] hunched over,” she said. “I look at pictures now of myself and I am standing up straight, and I see a confidence in myself I didn’t see before.”

Rossi, too, has been clean for three years. He sees teenagers and 20-somethings come through the Phoenix door and he sees himself. Phoenix Multisport wraps its arms around these desperados. The climbing and boxing and biking and lifting are sparks, but the program’s embracing ethos is the true medicine.

“It is more about the community. It wasn’t exactly the high from rock climbing, or Cross Fit — it was more the new group of friends that put me in a more positive environment,” Rossi said. “We introduce people to these sports so they can come together with a group of people trying to build lives in recovery.

“These sports and these friends are transformative. When they see someone on the climbing wall they immediately think ‘I can’t do that.’ Then the group comes into play. Someone teaches you how to tie-in, and pretty soon you are at the top of the wall with everyone cheering your name.”

The despair is left down in the abyss.

“My life would have been different without Phoenix,” said Rossi, a paid full-time Phoenix instructor. “It changed the entire face of my recovery. It gave me a different group of friends to be around, who weren’t trying to do drugs and get high.”

Phoenix finds addicts when they are between 16 and 23 years old, which means they may have already been spinning on life’s edge for four or five years. When the newcomer says, “How do you know I’m feeling?” the instructors have their own harrowing stories to tell.

“What makes it so powerful is they know we have been there, right where they are,” said Strode, who had his first drink when he was 11 and his last drink when he was 24. “Even if we don’t talk about it, that’s the foundation we start from, which builds an understanding of each other immediately. We view each other as peers, we don’t have a hierarchical setup where I am the clinician.

“I’m coming from a place of ‘I have pushed through these hard workouts before.’ We are sweating together, which builds a bond, so it is a peer dynamic, as opposed to a clinician passing down something to the client.”

This process is called a Peer-Based Recovery Support Model, and it is another key facet of implementation, giving Phoenix an edge over conventional treatment programs. Being a recovering addict is not required to be an instructor, Strode said, it just works out that way. The true believers stick around to shepherd the next addict who walks through the door.

There are some peer-to-peer programs that have a national focus, such as Narcotics Anonymous and the National Alliance on Mental Illness (NAMI), which has local chapters in many states. Many communities have programs such as PEER Services, which has operated on the north side of Chicago since 1975 and provides aid for substance abuse and its prevention.

“It works because the physical activity sheds that armor addicts have, it cuts to the human side quicker,” Strode said. “Hanging from a rock, sure, it wakes up the dopamine effect, but then it allows them to build a bond because they are being encouraged. There is a sense of citizenship and a safe place.”

Here is a typical story from Strode.

A teenager with jewelry was cleaning the bathroom at Phoenix’s Denver facility. The jewelry was an ankle monitor. He was out of jail, but on a court-ordered leash. He had community service to do, except Strode saw the kid month after month after month, cleaning bathrooms and wiping down weights.

“Man, he must have done something pretty stiff for all that community service,” Strode thought.

Strode talked to the kid. Why so much community service, he asked.

“Oh, I finished community service a long time ago,” the boy said. “I just like the people here. So I’m a volunteer. This is my safe place to be.”

So, that teenager started working with instructors and now is a certified Cross Fit coach.

Needless to say, Strode and his supporters in Denver would like to share that story and the program with other cities around the country.

“We need to find the right components in communities that want Phoenix there,” he said. “We need the coaches. We need people to help oversee the fidelity to the mission, a local board, and we need the philanthropic support.”

The components include cities that can financially sustain the Phoenix Multisport model and have traditional treatment centers that could partner with Phoenix.

Here is the big number: Phoenix has served 15,000 people in eight years. The abyss is less crowded.

A localized version of this story ran in The Boston Globe.